The visit was a valuable opportunity to discuss delivery of the Castlemaine State Festival 2021 which has just recently received a Federal Government grant of $172,000 to deliver a COVID-safe festival.  This will showcase the best that Castlemaine and the broader region has to offer.

The grant was made possible through the Morrison Government’s $60 million Restart Investment to Sustain and Expand (RISE) Fund which is supporting 115 festivals and shows around Australia and will support the creation of around 44,000 jobs in a major boost for regional tourism and employment.

The Morrison Government is also supporting the Castlemaine State Festival by delivering $40,1000 for the musical performance Riel ë Nhyiër which will feature on the opening night of the festival.

This funding was delivered by Festivals Australia and the musical performance involves a celebration of South Sudanese culture in central Victoria. Produced in collaboration with Arena Theatre Company, the work will intertwine stories and original songs of the civil war in South Sudan with personal accounts of each of the performers’ unique journey in now calling Australia home.

Senator Henderson was delighted with the progress leading up to this year’s Festival in March and welcomed the significant support the Festival is receiving from the Morrison Government.

“Country festivals and shows are a such an important part of life in regional Victoria.   I am delighted that the Castlemaine State Festival 2021 is able to proceed despite trying times and in a COVID-safe way”

“I commend the work of all the organisers and volunteers which will make this year’s festival one to remember.”

“The Coalition Government supported Stage 1 four years ago.  The Stage 2 development, which includes the installation of a sprung floor, retractable seating and moveable walls, represents a wonderful vision which would deliver an even better performance space.” 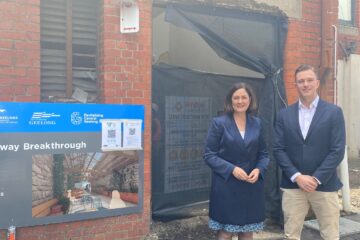