Opinion: No government can think it’s above the law, Herald-Sun 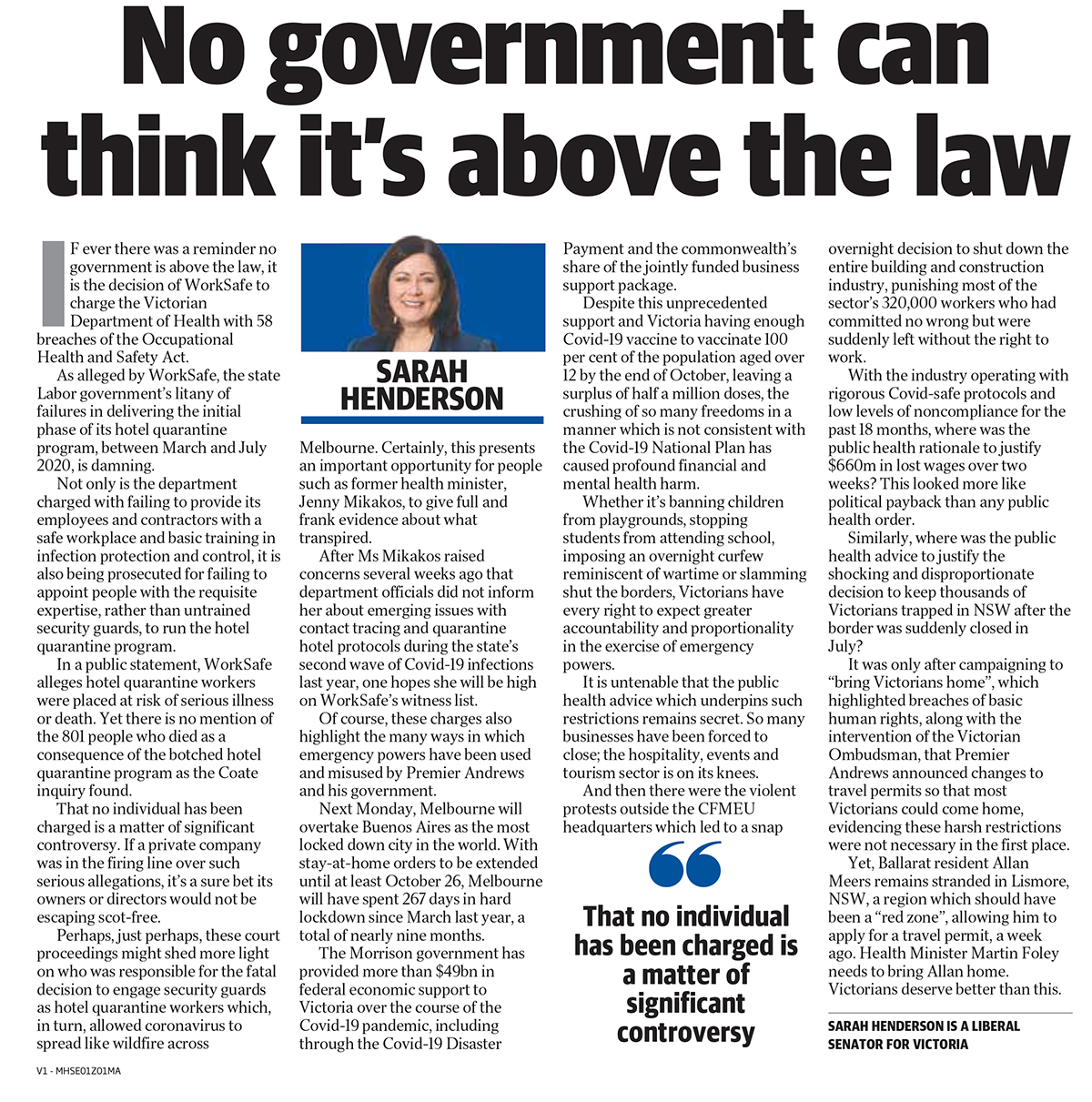 If ever there was a reminder that no government is above the law, it is the decision of Worksafe to charge the Victorian Department of Health with 58 breaches of the Occupational Health and Safety Act.

As alleged by Worksafe, the state Labor government’s litany of failures in delivering the initial phase of its hotel quarantine program, between March and July 2020, is damning.

Not only is the department charged with failing to provide its employees and contractors with a safe workplace and basic training in infection protection and control, it is also being prosecuted for failing to appoint people with the requisite expertise, rather than untrained security guards, to run the hotel quarantine program.

In a public statement, Worksafe alleges hotel quarantine workers were placed at risk of serious illness or death.

Yet there is no mention of the 801 people who died as a consequence of the botched hotel quarantine program as the Coate Inquiry found.

That no individual has been charged is a matter of significant controversy. If a private company was in the firing line over such serious allegations, it’s a sure bet its owners or directors would not be escaping scot-free.

Perhaps, just perhaps, these court proceedings might shed more light on who was responsible for the fatal decision to engage security guards as hotel quarantine workers which, in turn, allowed Coronavirus to spread like wildfire across Melbourne.

Certainly, this presents an important opportunity for people such as former health minister, Jenny Mikakos, to give full and frank evidence about what transpired.

After Ms Mikakos raised concerns several weeks ago that department officials did not inform her about emerging issues with contact tracing and quarantine hotel protocols during the state’s second wave of COVID-19 infections last year, one hopes she will be high on Worksafe’s witness list.

Of course, these charges also highlight the many ways in which emergency powers have been used and misused by Premier Andrews and his government.

Next Monday, Melbourne will overtake Buenos Aires as the most locked down city in the world. With stay-at-home orders to be extended until at least 26 October, Melbourne will have spent 267 days in hard lockdown since March last year, a total of nearly nine months.

The Morrison Government has provided more than $49 billion in federal economic support to Victoria over the course of the COVID-19 pandemic, including through the COVID-19 Disaster Payment and the Commonwealth’s share of the jointly funded business support package.

Despite this unprecedented support and Victoria having enough COVID-19 vaccine to vaccinate 100 per cent of the population aged over 12 by the end of October, leaving a surplus of half a million doses, the crushing of so many freedoms in a manner which is not consistent with the COVID-19 National Plan has caused profound financial and mental health harm.

Whether it’s banning children from playgrounds, stopping students from attending school, imposing an overnight curfew reminiscent of wartime or slamming shut the borders, Victorians have every right to expect greater accountability and proportionality in the exercise of emergency powers.

It is untenable that the public health advice which underpins such restrictions remains secret.

So many businesses have been forced to close; the hospitality, events and tourism sector is on its knees.

And then there were the violent protests outside the CFMEU headquarters which led to a snap overnight decision to shut down the entire building and construction industry, punishing the majority of the sector’s 320,000 workers who had committed no wrong but were suddenly left without the right to work.

With the industry operating with rigorous Covidsafe protocols and low levels of non-compliance for the past 18 months, where was the public health rationale to justify $660 million in lost wages over two weeks? This looked more like political payback than any public health order.

Similarly, where was the public health advice to justify the shocking and disproportionate decision to keep thousands of Victorians trapped in NSW after the border was suddenly closed in July?

It was only after campaigning to ‘bring Victorians home’ which highlighted breaches of basic human rights, along with the intervention of the Victorian Ombudsman, that Premier Andrews announced changes to travel permits so that most Victorians could come home, evidencing these harsh restrictions were not necessary in the first place.

Yet, Ballarat resident Allan Meers remains stranded in Lismore, NSW, a region which should have been a ‘red zone’, allowing him to apply for a travel permit, a week ago. 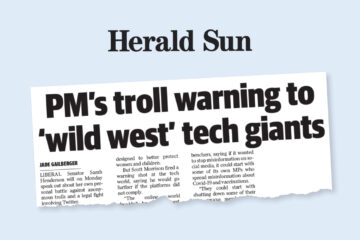