I present the 10th Report of 2020 of the Parliamentary Joint Committee on Human Rights, the Human rights scrutiny report, and I move:

I’m pleased to table the Parliamentary Joint Committee on Human Rights 10th scrutiny report of 2020. As usual this report contains a technical examination of legislation with Australia’s obligations under international human rights law. In this report the committee considered 173 new legislative instruments and commented on two of them. For example, the committee seeks further information about the human rights compatibility of an instrument which exempts childcare workers from the JobKeeper wage subsidy and one which suspends an employee’s right to workers compensation on Norfolk Island.

For those who are unfamiliar with the work of the committee, I take this opportunity to reiterate that the committee has not formed a concluded view on the human rights implications of these instruments as is the case with the committee’s preliminary report on any bill or instrument.

The committee considers that the bill, which would broaden the circumstances in which the NDIS commissioner could make a banning order in relation to NDIS providers and their current and former employees, is designed to help prevent the violence, abuse, neglect and exploitation of persons with disabilities and so promotes and protects the rights of persons with disabilities.

The committee also notes that publishing on a register, which is available as a public website, the details of any employees who have been banned also engages and limits the rights to privacy. This right may be permissibly limited if it is shown to be reasonable, necessary and proportionate. The committee notes the legal advice that, in assessing the proportionality of the measure, it is necessary to consider whether there are less restrictive rights or ways to achieve the same aim such as making the register available on request to the NDIS Quality and Safeguards Commission rather than it being publicly available on a website by default, which of course provides easier access for people with disability.

In the committee reaching this conclusion—and, as I say, I do this on the basis that I don’t believe there will be any dissenting report and so I make comments subject to that—I make the important point in this instance that all committee members have not, in all respects, accepted the advice of the independent legal adviser to the committee, which is advice that we obviously greatly value. In my view, and in the view of the committee, it cannot be justified that the rights to privacy of somebody who’s been banned for providing services as an NDIS provider or employee prevail—and these are, of course, people who may have engaged in the most heinous of conduct—over the rights to people with disability, and this is a matter of proportionality and a matter of consideration. I do also say this as a former assistant minister for disability services cognisant of the need to provide maximum protection to NDIS participants and impose the least amount of administrative burden on participants.

As I reiterated in my contribution yesterday, the committee considers the minister’s response, the independent legal advice and other relevant material in its consideration of the compatibility of the bill or instrument with Australia’s human rights obligations. In our parliamentary democracy, committee members are required to independently consider human rights implications, and that is our role.

In determining whether a legislative measure constitutes a permissible limitation on the specific human right, committee members are invariably required to weigh up various considerations, including competing human rights, as is the case here.

On this note I want to reference the contributions to the debate on the annual report today by both Senator McKim and Senator Green and also reference some very regrettable comments made by Senator McKim published in The Guardian yesterday in an article titled ‘Greens accuse Coalition of “aiding and abetting” formation of a surveillance state’. I want firstly to reject those very improper and inaccurate comments that have been made by Senator McKim in The Guardian, which reflected on my motives in a most improper way and accused me, in relation to our consideration of the ASIO bill, in report No. 9 of 2020, of aiding and abetting the government’s building of a police and surveillance state. These are really quite disgraceful comments. They are not supported by the facts, and I would ask Senator McKim, who is in the chamber right now, to withdraw those particular comments.

Senator McKim also told The Guardian, in relation to not accepting the legal advice in all respects in report No. 9 of 2020, that it ‘beggars belief that the chair has once again ignored the independent legal advice’. Well, that’s inappropriate for a start, because in report No. 9 the coalition of the committee did not in all respects accept the independent legal advice. And despite what Senator McKim said, yesterday in this place I gave some very cogent reasons—

Senator McKim:  No you didn’t.

Senator HENDERSON:  I’ll take that interjection. Senator McKim says I didn’t. Well, in fact I did. I gave some very cogent reasons that not in every respect was the legal advice accepted by the coalition members. It is quite hypocritical of Senator McKim to criticise coalition members of this committee for not accepting the legal advice in all respects, and he’s made these comments on two occasions in this place and also to The Guardian, when in fact with this report all committee members—and I say this subject to there not being a dissenting report—appeared to have not accepted the legal advice in all respects and of course have determined that it is proportionate and that it is proper that the rights of people with disability in this case prevail such that the measure is proportionate.

So, I do want to state very clearly my disappointment, particularly at the comments Senator McKim has made. I have a lot of personal respect for Senator McKim, but I am very, very disappointed that he would reflect on my motives in such a way, including in making what I think are some completely disgraceful comments. Determining what is proportionate is not a black and white exercise, and I also say this in relation to Senator Green’s contribution. It is a matter of judgement, and in this report we are continuing to do that. (Extension of time granted) This conclusion demonstrates that it is correct and proper that the committee reaches its own conclusions without fear or favour, and under my chairmanship we will continue to do so. I encourage all parliamentarians to carefully consider the committee’s analysis, and with these comments I commend the report to the chamber. Thank you very much. 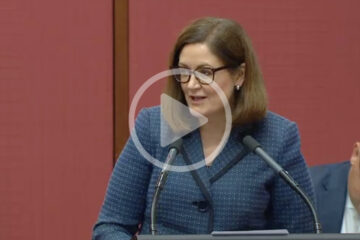