I rise to raise again in the Senate my deep concerns about the extreme distress and damage which is being inflicted on Victorians during this second wave of emergency restrictions. Today, with 70 new daily cases in Victoria, there should by now have been a road map to reopen the economy. We need hope, we need a plan and we need a road out.

The damage which is being caused is profound: a cost to our economy of an estimated $400 million a day—in total, some $10 billion to $12 billion during this second wave. Treasury estimates that up to 400,000 jobs will be lost. The social isolation, the travel bans, the eight o’clock curfew, the border closures and the closed workplaces are all causing profound damage, including to the mental health of countless Victorians.

Our Prime Minister has vowed to tackle this again at national cabinet on Friday, with a COVID hotspot definition and, we hope, more consistent guidelines and proper exemptions to current border restrictions from the premiers and chief ministers.

Victorians need to get medical advice. They need to pick up their kids from school. They need to be able to travel to be with loved ones who are dying from terminal illness. As I said to the Cross Border Commissioner in a meeting yesterday, the haphazard and chaotic manner in which all of us are making representations about particular exemptions is unacceptable, and a proper exemption unit must be established in New South Wales so that these cases can be quickly and urgently dealt with.

There is a new 50-kilometre border zone but that is simply not good enough. A mother, Amanda, living in Birregurra needs to know that she can pick up her child from Yanco Agricultural School in New South Wales. There are literally hundreds and hundreds of children boarding in schools—in Queensland, New South Wales and other parts of the country—who are trapped, with the school holidays approaching and no certainty as to how they are going to get home or whether they will have a holiday with their family. The Victorian government’s failure to deliver any sort of plan to reopen the economy is irresponsible. It is undermining business confidence and is causing growing despair. Victorians understand the need for health restrictions, including those made using stateof- emergency powers. But restrictions must be proportionate to the public health risk, justifiable and temporary.

Tonight in the Victorian parliament, Premier Andrews is seeking a six-month extension to emergency powers, which is vehemently opposed by the state Liberals and Nationals, after being stymied on a 12-month extension. I have already raised deep concerns about some restrictions that have closed businesses on what appear to be arbitrary grounds, including the case of Jim’s Mowing, private gardeners who cannot work in Melbourne while the same type of work is permitted by council workers. There are too many contradictions and too many inconsistencies. Large construction sites and other large businesses can function almost as normal, yet a sole trader who wrote to me—Anna—who runs a dog grooming business, and is a sole parent, who works on her own in her own home, is prohibited from working. It is almost destroying her.

Victoria is becoming a state of thousands of broken businesses, destroyed jobs and lost livelihoods. Of course, our government is providing unprecedented economic support, including through JobKeeper. But this must change. This situation must be fixed. We need a roadmap. We need to reopen the economy and Premier Daniel Andrews needs to get on and fix this urgently. 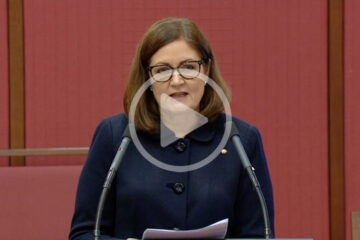 I rise to speak on the incredibly important issue of aged care. It is with regret that I have to call out these very grubby tactics from Labor senators over the tragic issue of aged Read more…